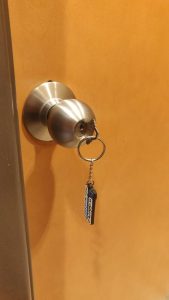 When you are locked out of the house, you usually seek a locksmith since it is not easy for an inexperienced person to open the lock, right? Even a trainee locksmith would take more time to open the lock than it would demand of an experienced one. Therefore, we understand that both experience and skill are elements in the opening of locks.

The job of making a lock challenging to open is the consistent effort of lock engineers to create high-security locks to make it difficult for the regular people to open. As the weakness of one lock is discovered, a new lock with advanced technology to build on the vulnerability of the last one is created to provide enhanced security for the user. From Mobile locksmith to Commercial locksmith the technology of locks is becoming advanced that we need specialists to deal with locks at every stage of need.

One by one, every trade in the world is having their share of disruptive technology; but the locksmith world has never been idle in term of changes in the form, shape and type of locks from one generation to the other since the advent of lock-in ancient Egypt. Let’s take a walk down the history to see why a professional locksmith will continue to be relevant and move with time:

The 600 BC Ancient Assyrian Keys

This is the era of wooden lock and keys; the key is a large prolonged wooden material that lifts a series of movable pin tumblers to slide opens the wooden bolt. The locking position is having the pin tumblers enter into position to latch the lock and shut the door until lifted again. This was the type of lock used in Assyria and in Egypt time.

The Assyrian lock could not have the acceptance it had in Assyria and Egypt in the west; the need for a lock that offers better security and portable was high which got Roman engineers thinking on how to modernise the Assyrian lock with part of it made of metal. The Romans needed a lock that indeed serves as a symbol of security. Thus the Roman lock and keys were made and in use between 100AD to 200AD in Rome and its sphere of influence.

The Medieval Europe locks were more of improving the aesthetics of lock and not in a drastic change to the mechanical component of the locking system. However, locks at this time were well decorated and a departure from the crude and rough template of previous locks. The keys are metals and more durable and handy. One thing that never changes in the evolution of locks is the purpose for the device – security! Each improvement in lock evolution provides better protection for the user.

The John Wilkes Detector Lock offers sophistication and advanced technology compared to previous locks. This is the era when real locks were introduced along with its keys to securely lock a door with much more peace of the mind. The lock has an advanced mechanism that can lock and unlock the door as well as has a security feature to tell you if someone has been messing with your lock when you are away. This feature is a ticking mechanism that contains a numbered dialer which dials when the lock is unlocked. The sophistication of the detector lock notwithstanding, the need for better lock continues.

Robert Barron invented the tumbler lock; this lock was a real advancement over John Wilkes’ Detector lock. The key can raise the lever of the tumbler to lift the bolt to move in or out in unlock and lock positions. This is a smoother lock operation compared with the previous ones.

This is the period of commercial locks where locks are sold in the open market. This Joseph Bramah engineered lock offered security against manipulation and became a subject of context to find anyone that can breach it. The company provided 200 Guineas for anyone who could defeat the lock; the contest went on for 50 years until A.C Hobbs won the competition in 1851 with over 50 hours efforts until he succeeded.

If security is the hallmark of the best lock, this lock is a messenger of hope in lock security. Engineered by Jeremiah Chubb, he introduced a four-lever mechanism that when a wrong key is used to open it, the lock will stop working until a special anti-lock key is used to reset the device to continue working again. Called regulator, the security feature can detect when the wrong key is used and shut down the lock until the rightful owner gets a rest key to reactivate the lock.

The inventor was Linus Yale Jnr. Who revolutionised key design which is used to date. He designed a lock where the key is no longer as long because his lock goes into the door making access shorted to lock and unlock the door.

The Yale lock is still in use in the 21 century since it debuted in the 19th century to date. There have been several improvements on the 1865 Pin Tumbler Mortise Cylinder Lock with many Yale’s descendant locks in the market today.

Following magnetic stripe card is the keypad; the purpose of the keypad is to achieve convenience and security at the same time. Since all members of a family would need access to the lock, the keypad can use remote key and number combination; whichever is available!

The evolution of locksmith in the history of locks offers an exciting story for professional locksmith such as the Winnipeg Pure Locksmith . Locksmiths at any point in the evolution process must have skills to interact with locks and perform the full function of managing such locks whether manual or digital lock.

Do you live in Winnipeg and want a local locksmith that will have your back during lock trouble? Call Winnipeg Pure Locksmith today for all your lock needs.